Opened in 2016, our goal was to create an authentic German-culture hub for the residents of East Tennessee. Originally, on opening day, we only had six taps of our own beer available – these included German Pilsner, Munich Dunkel, Hefeweizen, Helles Bock, Schwarzbier, and Radler. Now, we can proudly boast anywhere from 10-15 Schulz Bräu brews on tap at a time. A multitude of décor, events, traditions, food, and drinks have been added to the roster over the years. As we originally began as a family-owned and operated company, we are excited to now extend our staff list every year due to our growth and popularity in the community.­­

The original concept for Schulz Bräu started with Nico Schulz, current owner. The castle was at the forefront of the company identity and was one of the first pieces of construction to go up in the new brewery. Now, we like to think of that same castle as our staple image. German culture and architecture flows throughout Schulz Brau once past the castle doors. The Bierhall, Mezzanine loft, and Biergarten are a testament to this practice. Additionally, a majority of the furniture was imported from Germany and other Biergartens to give that authentic experience. With the basics covered early on, we now focus on coming up with bigger and better! Extensions, new tech, bigger viewing screens, barrel stands, gardening, and more are added consistently.

Today, various company products and merchandise are still imported from Germany. Most interesting though, is the story of the beer! All of our malt grain used in our beer is imported from Bamberg, Germany. When it is finished with its process in our brewing system, we ship it off to local farmers to support livestock. Most of our brews draw inspiration from traditional Bavarian beers. Our Dunkel, Oktoberfest Marzen, Doppelbock, Helles, and Rauchbier all take on that same malt-heavy brewing process.

We also choose to follow Reinheitsgebot brewing practices. From our first brew until our last, we only had the purest ingredients of grain, yeast, water, and hops. No preservatives. No chemicals. After brewing, each part of our beer production was important in creating our signature brews. Creating the cans our beer would be sold in took time and we wanted specific details implemented on each type of can. Snapshots of German landscape and society can be viewed on different cans in a lightly printed background. Our Reinheitsgebot practices are also highlighted along with the mention of being a German family-owned business. Since opening, we do our best to call homage to our German culture in every product we create. Whether that be through a picture or a practice!

Creating a German aesthetic is not all we do. We practice it! When you come to Schulz Bräu, do not expect a similar atmosphere to any other brewery around. We practice European/German tradition and relaxation. Unless you are popping in to buy cans to-go, this brewery is a place to have an experience. With the relaxed atmosphere we have curated from opening day, regular customers know that they can take their time when they spend an evening with us. While service is punctual, it should never be rushed and a lot of how you might experience Schulz Bräu is up to you. We have set the scene. You are here to enjoy!

Schulz Bräu stands as strong today thanks to the hard work of each family member. While Nico usually works on the corporate parts of running a brewery (and jumps in wherever else is needed), his parents keep the ship running with staff and guest enjoyment, brewing system maintenance, and continuous venue upkeep.

Ilona is the one responsible for much of the décor you’ll see throughout the venue. She also puts considerable effort into curating the best German food and treats! If she has not hand-made it, she has had her eye on its production in Germany for a while. (Psst! Try the tea!) Additionally, if you have had the chance to enjoy the food from our kitchen, be sure to thank Ilona. She helps the hard-working kitchen staff to keep your favorites on the menu and helps provide the special menus for holidays and events.

As a busybody, Wolfgang is never still for long. Whether he is working on the brewing system, building add-ons for the venue, managing bar staff, or zooming through on his forklift, Wolfgang knows the maintenance it takes to keep production running smoothly. However, he makes sure not to miss out on the atmosphere everyone works to create. He pops into the taproom enough for most regulars to have built up a repertoire by now.

There are a few more key members of the family that help out at Schulz Bräu. Brittany Schulz, Nico’s wife – now a pharmacist – worked at Schulz Bräu in those first few years. She was responsible for a lot of the initial product aesthetics, event planning, and marketing/communications. Now, when she comes into Schulz Bräu, she gets to enjoy and spend time with family. Her parents also jump into the fray during busy times like Oktoberfest and help with décor and workflow. They love to show their support of the family business!

Today, Schulz Bräu is able to proudly claim its authentic craft beer and community-unifying events. Coming from Germany, the Schulz Family have made their mark in Knoxville, Tennessee.

Read this feature on our Grand Opening: https://www.wvlt.tv/content/news/Schulz–382392651.html 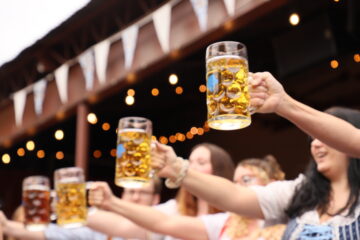 Learn the History Oktoberfest first occurred on the 12th of October in 1810 in Munich as a celebration of the marriage between Bavaria’s Crown Prince Ludwig and Princess Therese of Saxony-Hildburghausen. The fields that held Read more… 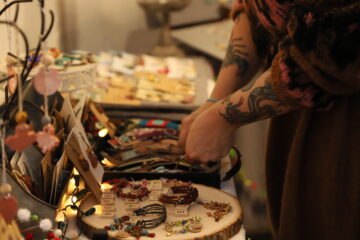